In the nascent campaign of actions and remonstrance to halt the logging of the last old rainforests of Northern Queensland from 1981, ‘emotive’ was a commonly projected term of derision. To the officials of the Bjelke-Petersen state government, only the ‘rational’ was valorised. So, ‘emotive protestors’ and ‘emotive arguments’ were deemed disconnected from real life and had no valid argument. It was all ‘feeling’, not ‘fact’. Where ‘fact’ was economic reason: industry, jobs, state royalties, and the ever present but unarticulated value of votes in the local political constituencies of the tropical north coast. Even if all were in rapid decline, as the short-term, intensive logging industry had at most five years of life remaining. An alternative economic, scientific and bio-heritage argument of values eventually won the day in 1988, but only after political change: a new Australian government proclaimed the inscription of the Wet Tropics of Queensland onto the World Heritage List in December that year.

Today, December 4, 2014, it is intriguing to read Adam Giles, the Chief Minister of the Northern Territory, valorising emotion and ‘emotional protesters’—because they can be talked to. Unlike ‘political protesters’—a straw form at best constructed from imaginary urban fly-in fly-outers who presented at mine site protests for political reasons, on a whim, or as a ‘lifestyle choice’. As Helen Davidson writes, Giles thinks ‘emotional’ mine protesters only need to have mining’s benefits explained: “[T]he ones who are there for emotion, there’s an opportunity for a conversation.” But: “You can’t educate everyone with an activism mindset because many of them are there for political reasons, not emotional reasons.”

A full circle from the tropical eighties lying on hot dirt roads or carting a photographic exhibition on the beauty of the Gondwana remnant forests around Townsville to shopping centres on Saturday mornings to fill petitions with local hand signatures. But is Giles’ intriguing perspective informed in part or whole by a particular Indigenous Australian enworlding? An understanding that local Aboriginal elders and land custodians have ‘feelings’ and emotions because they are attached to and care for – and care about – country, rivers, animals, food, local systems of interconnected life? That country is the basis of culture, of multifarious life? As Borrooloola elder and painter Jack Green was quoted by Davidson in relation to the McArthur River zinc-lead mine: “We’ve all got to live here, we’ve all got to fish out of the water.”

Or might there also be an impulse to construct a new binary divide between the emotional and the political? Where ‘political’ is intellectual, calculating, strategically unemotional and emphatically not the realm of belonging or belonged-by ethics. Not the realm of an expanded ethics of citizenship, or denizenship? To re-entrench a rural-regional-remote/ city divide of thinking and being that radically interconnected and mobile communities and individuals too readily undermine?

A new bloom space is seeded here. Emotional attachment to land-country-homeplace and emotionally energized protestation against invasive or deleterious mining, fueled further by seeming disregard for consultation with the spectrum of invested denizens, is valid. Warrants tending. Calls to be listened to. And yet, intimately entangled with affective relations with homing lands and spaces is reason: equally valid ecological, social and economic arguments and alternatives manifested by the daily experiential knowledge of locally embedded, sensate, thinking people. Reason rich acts are easily jettisoned or sidelined as ‘political’ or ‘politically motivated’ when embodiment and rationality are hived off into disconnected boxes in the ecology of human sensibilities.

In this approach, emotion can be ‘managed’. Allowed to be expressed. Let off as evanescent steam. ‘Rational’, abstracted, ‘economic benefits’ calmly talked into this de-heated conversation. Passion is fine, but not if it lingers, is re-stoked, provokes rational actions that reject the proffered narrative. The heat—the criticality of the unfolding ecological-social-economic-spiritual local miasma—must be unfelt. And the voices of the bodies breathing the air, drinking the water, eating the fish and articulating the emotion also unheard.

If the affectively charged and articulated protest of many across the social and geographic sweep of the ancient continent is listened to, this entangled reality, this all too rational publicly witnessing of lived truths would move the conversation beyond these straw blocks and binaries of vested financial interest and industry reaction. Listening is not the same as hearing though. So, is there the political-pecuniary will to listen more deeply? 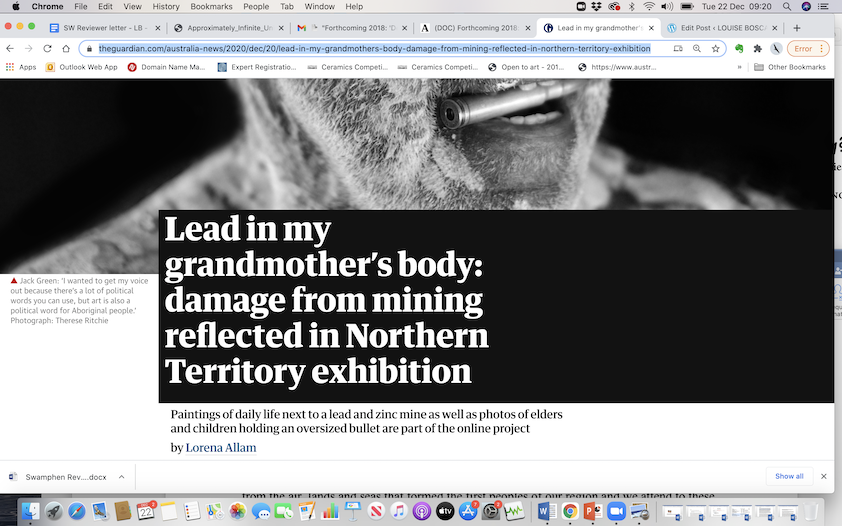 Timeline of media updates below

The race to avert disaster at the NT’s McArthur River Mine:

‘They’ll get rich and go’: Glencore’s McArthur River mine could take 300 years to clean up

Darwin Festival: The power and politics of Indigenous anti-mine art

MCARTHUR RIVER AT RISK OF BEING REDIRECTED THROUGH MINE