Here, I first present research from the localised Anthropocene: seaport to seaport in a two year trace of the Shadow Places.

This is the shadows trace, which is developed fully in chapter six of the thesis of my doctoral research, The Trace of An Affective Object Encounter: a picture postcard, its provocations, and processual becomings (2016, University of Wollongong), https://ro.uow.edu.au/theses/4725/ 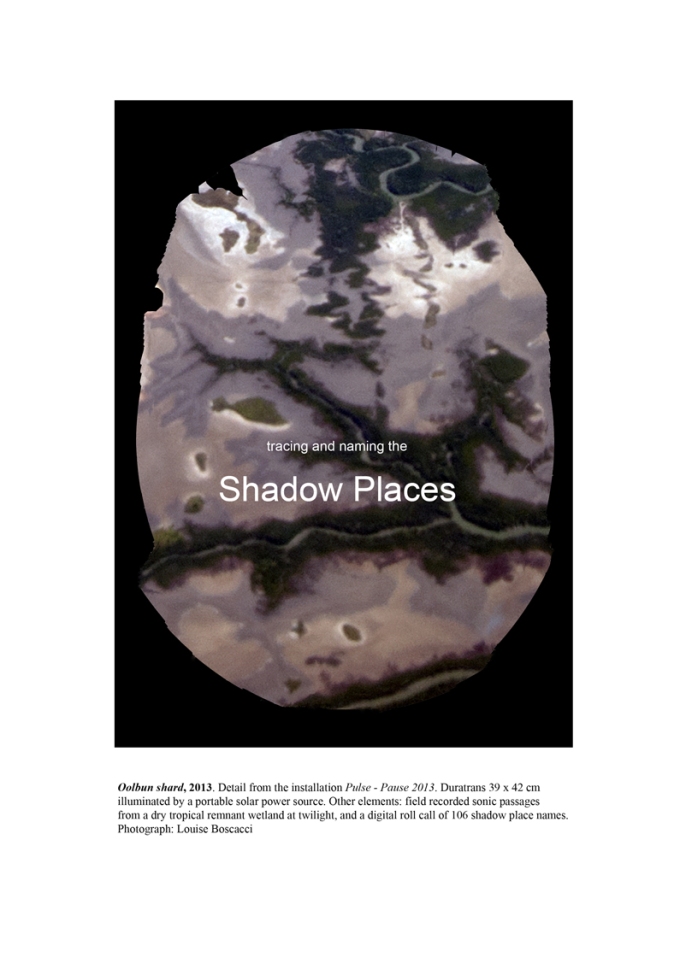 “There is no ‘One True Place’, the ecophilosopher Val Plumwood cogently argued in her recent concept of the Shadow Places.[1] The Heideggerian notion of dwelling and the vernacularized, oft-used sense of place are inadequate to account for a contemporary age of interconnectedness. All places have their ‘shadows’, the multiple, disregarded places of material and ecological support that are likely to elude our knowledge and responsibility. Looking for, listening to, and naming the Shadow Places of a home place, or places of attachment and biological dependency, opens a space to explore a fuller eco-ethical understanding of one’s own enmeshment in the localized Anthropocene. How to approach the Shadows?

This eco-art research set out to name places of material and ecological connection to the Australian dry tropics city of Townsville by tracking the shipping movements through its port. [2] Systematically collected over the past two years, these shadow place names now compose an unfolding, ever-growing roll call. This, in turn, has created a portal to new investigations and interpretations underway. In September 2011 as part of the project, I daily attended the morning and evening twilight zones of remnant wetlands on the city’s coastal edge – to walk, watch and listen. One serendipitously affective encounter, in pulses of overhead sound and life form, was the bio-traffic of thousands of Magpie Geese arriving at dawn from the south. This was a shadow event itself, an ephemeral passage just out of sight and earshot to most in the booming city of 200,000 people.

Pulse_ Pause 2013 is one encounter assemblage from this Shadow Places project. Collected, stored solar radiation from the Illawarra Highlands powers the meeting of image, sound, and shadow toponyms.[3]

3 The Illawarra Highlands I refer to are also known in general or popular use as the “Southern Highlands”. These extend through both the Wingecarribee and the Wollondilly NSW local government areas. I refer to the Illawarra Highlands situated ecologically and transculturally in the upland water catchment zone of the eastern Wingecarribee district of the Illawarra Region (Sydney Basin Bioregion). This country is very different to the drier, more westerly parts of the Southern Highlands, extending from the towns of Bowral (Bong Bong) and Mittagong north, west and south. I am situated in the eastern Wodi Wodi lands and Yuin Nation country (Dharawal language) where I breathe in the breezes, rain, cloud and coastal fronts of the Tasman Sea; from the Bowral district west and north, the Gundungurra Nation hold continuing authority, knowledge and custodianship of country through to the Blue Mountains (LB 2016).

With brolgas and my mother on a day out driving, looking, listening, walking and talking near ‘Woodlands’ in Thul Garrie Waja country, October 2012. (Photo: the Author).